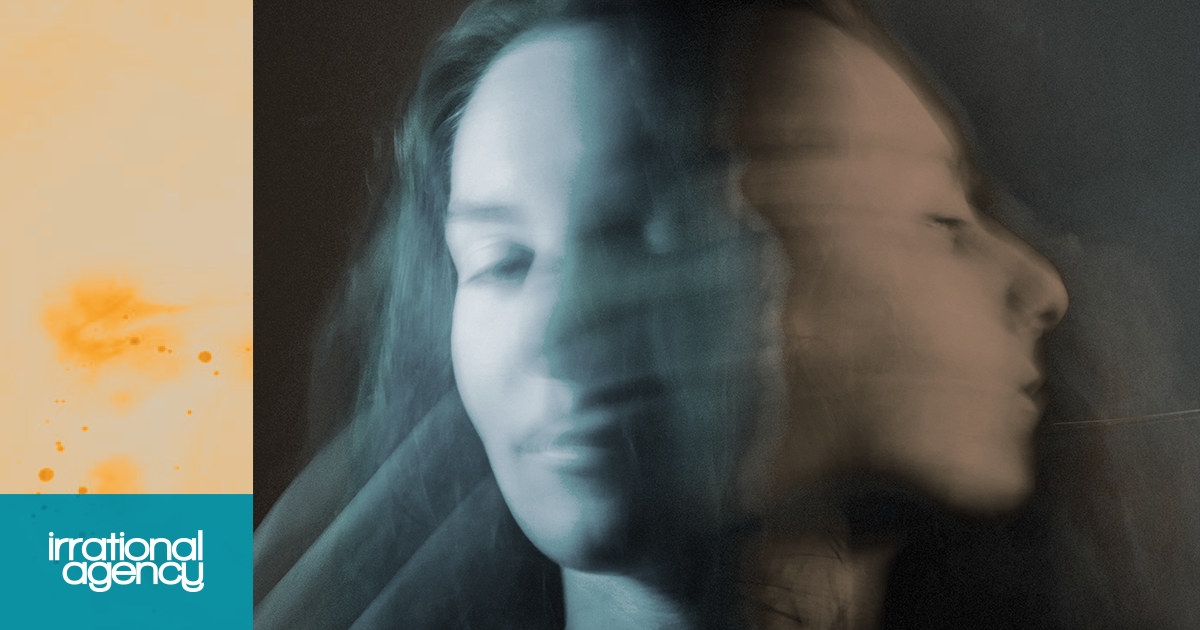 How the Hidden Consumer Narrative Explains the Say/Do Gap

One of the most famous phenomena in behavioral market research is the say/do gap. David Ogilvy, the advertising genius, is supposed to have written something along the lines of ‘People don’t know what they feel, they don’t say what they know, and they don’t do what they say’. More often than not, this quote is used to argue against doing any research at all.

The most famous of these three gaps is the last one: the say/do gap. Environmental campaigners are very familiar with how much recycling people claim to do and how much actually happens. Toothpaste makers know how many times their customers claim to brush their teeth every day, but they also know how quickly the toothpaste actually gets used up. And everyone who has tested a new concept knows you need to radically adjust downwards the claimed purchase intent to get anywhere close to a realistic measure of true purchasing behavior.

Why then is this gap so big and so consistent? Why are people across all these different domains so bad at knowing, or so unwilling to tell you about, their future behavior? Why are all the consumer insights experts failing to accurately predict what people will do?

Consumer psychology provides the answer: it’s in the customer narrative. More specifically, in the two different narratives that are operating in the customer’s head: one when you ask the question, and another when they take action.

Let’s take my friend John as an example. When you ask John a question about his future behavior, he unconsciously writes a short story in his head. It goes something like this: “One day, I will be in the hypothetical situation that this question requires. On that day, I will be a good person. I will consider the environmental and social implications of my choices. I will be rational and sensible. I will be smart. And I will choose between buying [the product] or doing [the action], and not doing it, according to the pros and cons of each choice.”

This narrative involves John playing a few psychological tricks on himself. First, he strips away all the distractions and puts his ‘future self’ in a vacuum, where he has nothing to think about but making the right decision. Second, his ‘future self’ does not have strong emotions, impulses, hunger or fear – instead he is a perfect decision-making machine. Third and most importantly, John’s future self doesn’t pay any of the costs of his decision. His bank balance doesn’t go down when he buys something, he isn’t worried about paying the rent at the end of the month, and he doesn’t feel the hassle of having to go halfway down the street to find a recycling bin. (Technically – for any psychologists or behavioral economists reading – he does experience these costs but they are highly ‘discounted’ – this means the pain they represent during research is much less than the pain they cause in the moment of decision, which distorts his ability to predict the choice he would make).

John is an ideal version of himself in this hypothetical. And as one final twist, he wants you to think he’s a nice guy. So he tells you he’ll buy the product. In fact, he’s looking for every excuse to say yes.

But wait until John gets to the shelf in the grocery store, or he’s on your website and has to enter his debit card number. Now the narrative is different.

Now he’s imagining everything that could go wrong. Potential pains and irritations count double compared to benefits. The money will leave his account right now – an immediate pain – while the advantages of using the product will only arise later – a prospective, abstract gain. 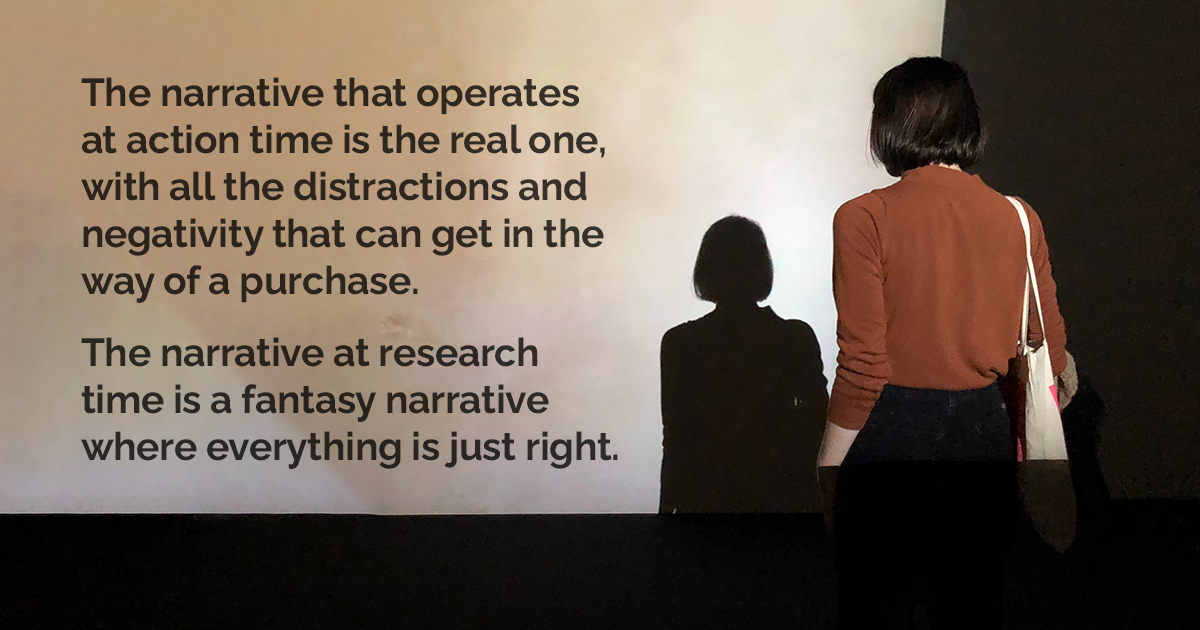 The narrative that operates at action time is the real one, with all the distractions and negativity that can get in the way of a purchase. The narrative at research time is a fantasy narrative where everything is just right. Is there a way to close the say-do gap? To measure the real ‘action’ narrative even at research time? When you use narrative research, there is.

You want to align these two narratives: the research narrative and the action narrative. To make this happen, you bring as much as possible of the action context into the research context. For example, show visuals of what the decision environment is like. Talk to your respondents about how they might get to that location and what else they are doing that day. Bring in all the distractions and frustrations that play a role in the action narrative.

You can use a behavioral framework to help you – a framework like COM-B tells you what barriers might be in place at action time, and you can recreate them in your research environment.

Some of the pains or barriers can’t be fully replicated in research. The biggest one is spending money: in a research session, you can very rarely get customers to spend their own money. So you might need to artificially inflate the importance of money in the narrative. Tell them to focus on the price. Ask them how much money is in their bank account, or in their weekly shopping budget. Make sure they look hard at whether they could afford, or would really want to spend, this money.

Your job is like a director on Crimewatch or another reality crime show: to reconstruct the scene of the crime and help your respondents to really experience what it would feel like. That way you will generate the action narrative at research time, and you can measure how customers would really behave.

By aligning these two narratives you can close the say-do gap. People often overstate purchase likelihood by a factor of 5, and claim to behave twice as virtuously in the recycling or toothbrushing realms as they really do. If you can close this gap your research will immediately become significantly more accurate, and much more powerful as a decision-making tool.

Consumers today are telling themselves stories - stories about who they are, what they want from the world, and how they see their future. When research fails to capture hidden stories, brands can't bridge the gap between what's being said and what's being done.

Check out our preview of Hidden Stories of Sustainability!

The Big Qual Revolution: How to Get the Richness of Qual at the Scale of Quant

The classic dilemma that accompanies almost every brief: qual or quant? Is it more important to get the exploratory,...
Read more >>
Why Consumer Psychology and Narrative Research Beats Focus Groups and Surveys Every Time 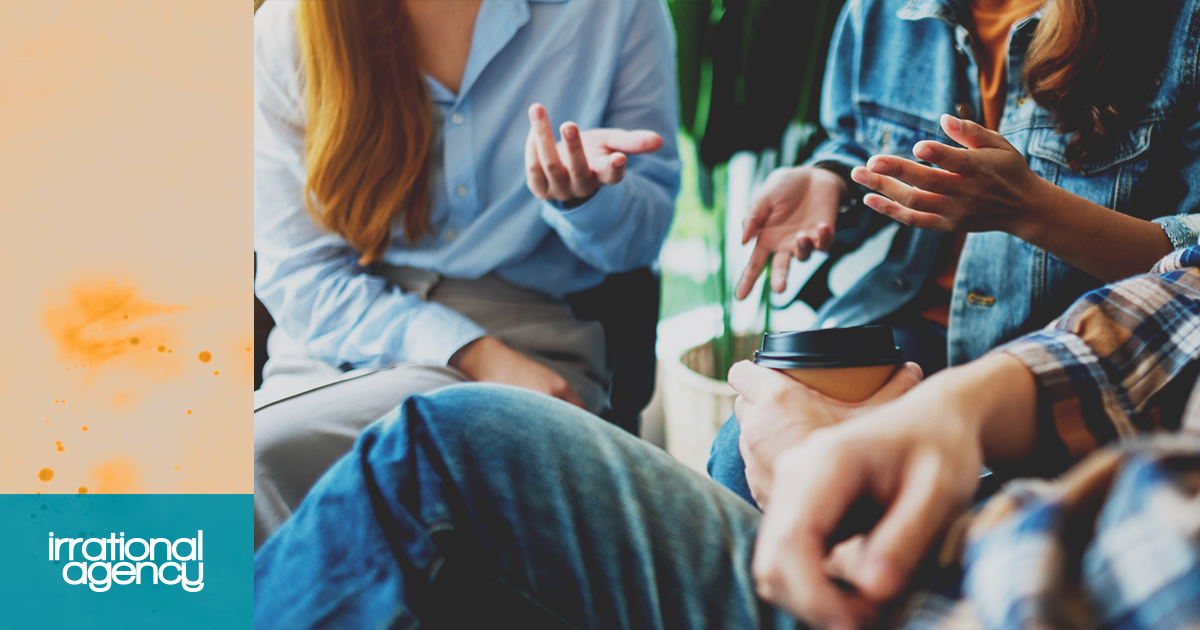 If you’ve sat in on a Marketing 101 lecture in the last 30 years, you’ll no doubt have heard the tale of woe that was...
Read more >>
System 3 Flexibility: How Consumer Narratives Address Multiple Business Challenges 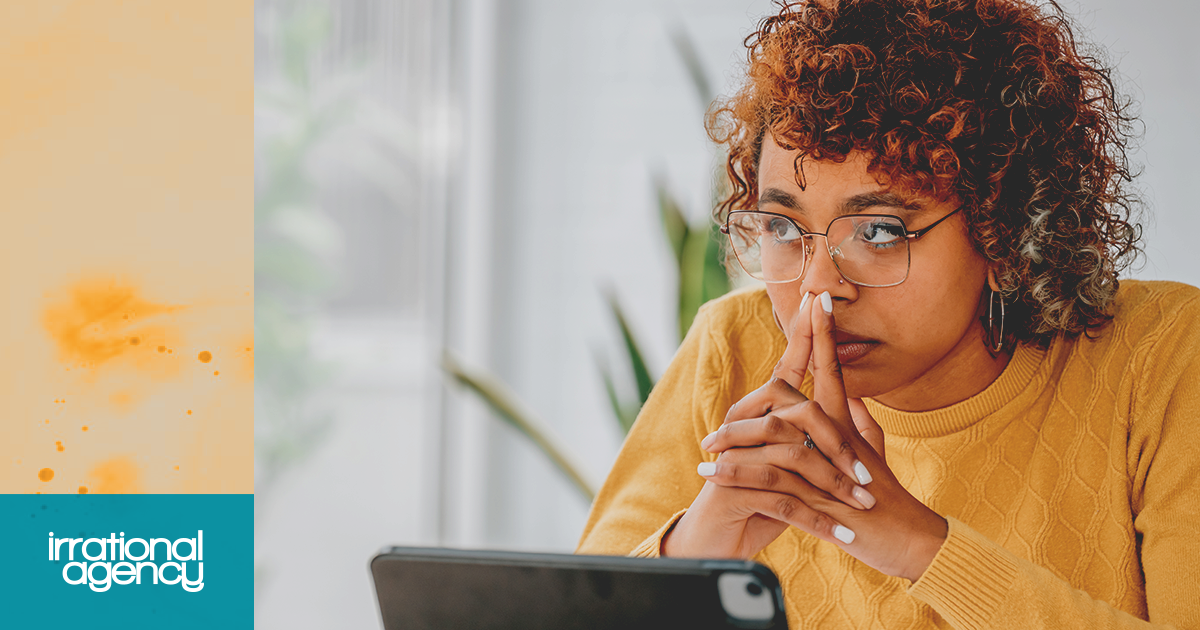 If you’re a consumer insights researcher working at a major brand, here are some questions you might ask yourself:
Read more >>
<< back to all posts